This page is also available in:

a. The way we make decisions

In an autocratic system, one or only few people make a decision. Autocracy is a very simple way of making a decision (at least in the short run). It is also fast. However, a clear challenge of autocratic systems are a very low level of participation and inclusion. Team members with a boss who makes autocratic decisions are very unlikely to show engagement in the organization’s success. Commitment will be low, and so will innovation from the members.

Majority vote is widely considered engaging and participatory, and we are used to considering majority vote “fair”. Voting is also a fast process that can be done easily with many people and little information. However, majority vote also means that up to 49.9% of the group will be ignored. We are not gaining new information from the people who vote against, and the level commitment is uncertain.

Consensus seems to be the most “fair” and inclusive way of making a decision. A decision can only be made when everyone agrees. Commitment will be high, and so will accountability and participation. On the flipside, consensus only works well in small, homogenous groups. It hardly ever scales up to a larger group or organization. Consensus is time-consuming and can be very frustrating and very likely to burn people out. If you know you will have to get everybody to agree in a painful and tedious discussion before you move forward with anything, how likely are you to introduce innovative ideas? It is the irony of consensus, that historically, the ideas of “we are all peers who decide” was something new but that consensus itself as a way of making decisions does not support giving rise to new ideas.

Between all of those, what is consent? You can think of consent as a version of consensus.

The difference between consensus and consent continues to produce some controversy. For some people, consensus is basically like consent. A fair statement would be that consensus can be lived like consent but does not have to be lived that way. If your version of consensus plays out similarly to consent, great. For many organizations, it is not. Consent is more clearly defined, both in its process and conceptually. If you want to put a slogan on it that makes the difference clear, one could say that in consensus, we ask everyone “do you agree?”. In consent, we ask “do you object?” 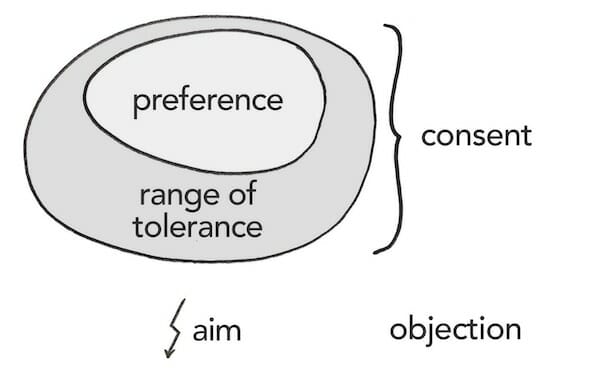 With range of tolerance we refer to everything that is not our preference but also not something we would object to.

Your personal preference will be what you would choose if you made the decision by yourself and for yourself. The area of objection is your “no way” zone. That’s everything that you are not willing to go along with because it really interferes with doing your work. (More about that in the next chapter.)

The range of tolerance is everything that might not be your preference but is something you can work with. As a picky vegetarian, I might not prefer to eat Brussel sprouts (I would not make them when cooking for myself) but I’ll eat them where they are there. I’d object to meat, however.

This visualization illustrates that the area of overlap between “no objection” is much considerately bigger than the overlap between personal preferences. In the same way, we can think of it in decision-making. If we all had to agree, we would only make a few decisions (and that translates to simple consensus, “everyone has to agree”). If we make decisions by consent, we can make many more decision because we have much more room to work with.

Decisions give us the opportunity to make changes and evaluate whether the changes mean improvement, and give us more options to adapt to outside and inside changes. Without new decisions made, we are stuck in our ways, and unable to respond to outside and inside changes of our organization. In an every changing world, not being able to respond to changes means the slow death for every organization.

d. What are objections?

We need to understand the notion of an aim to understand how objections are being defined. Aims capture what a circle (or an organization) is actually doing. Examples for aims are “baking and selling healthy bread and pastry in N. Amherst”, or “running a safe and holistic eldercare facility in Brattleboro”.

Objections are defined against an aim: a circle member objects to a proposal if they have reasons to assume that carrying out that proposal would harm the circle’s aim. For instance, if a bakery coop decided to buy frozen products to bake and sell, a worker-owner might object because selling ready-made products harms the bakery’s aim of “baking and selling healthy bread and pastry”.

Objections in sociocracy are not a roadblock, however. Having options of how to move forward by incorporating the objection is a true strength of sociocracy. See how to handle objections.

Now that we know what objections and consent are, let us look at the process of how we get to consent in the easiest and most time-efficient way.

In the diagram below, you can see all the steps of the consent process. Each of the three steps, presenting the proposal, working the proposal and announcing the decision has its own purpose. Going through them step by step sounds time-consuming but really it skipping steps that will cost you and your team time and nerves! 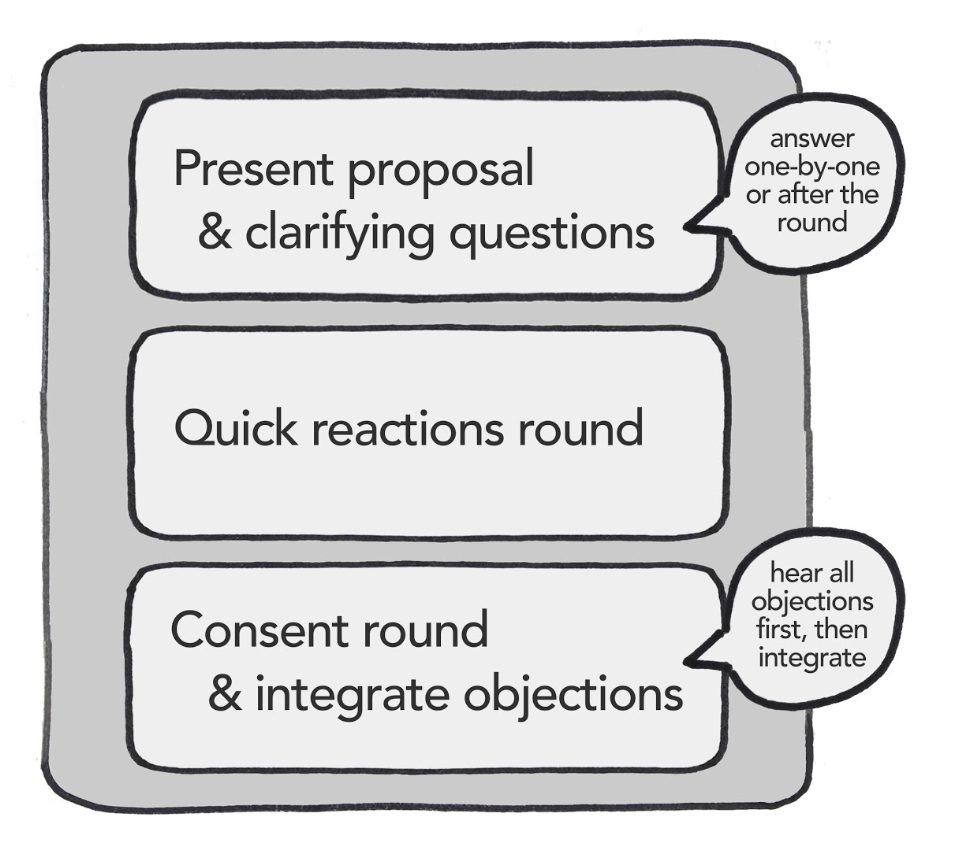 a. Present the proposal and allow clarifying questions

This seems like a very obvious statement but still it is not uncommon to miss it. By presenting the proposal we mean: read it out loud, or find another way of ensuring that everyone in the room knows what the proposal says. Why is this so important? Just imagine you have a meeting where you notice halfway through that some are referring to earlier, revised versions of the proposal. Oftentimes, especially after working on a proposal for a while, there are several versions circulating, and it is very easy to lose track of what the current version is. While we’re at it, avoid accepting a proposal into this process that has no actual wording! Something in writing, just to have a basis to start from, will boost your circle’s productivity significantly. Without something to work with, you are very likely to either waste time word-smithing, or you will notice only after the meeting that really, you were not on the same page. Then all your work during the meeting is undone. Just start out right, and avoid backlashes in the first place.

Make a draft proposal accessible ahead of time, or allow enough time during the meeting for circle members to read the proposal. Only when everyone is familiar with the proposal you are ready for the next step.

When everyone knows the proposal, circle members are very likely to have questions. In this phase, questions are asked that are necessary to understand the proposal. This is not the place to question the effectiveness of the proposal.

Clarifying questions are asked in rounds. Depending on group size, on how many questions you are expecting (and on how familiar or complex the proposal is), you can choose to gather questions in a round first and then let the author(s) answer the questions, or you can let the author or someone else answer questions one by one as they are asked.

A good prompt to start a clarifying questions round is to ask the circle “what do you need to know so you understand the proposal?” because focusing on understanding of the proposal will not side track you into a discussion. To support circles even more in distinguishing between their questions for understanding and their opinions about a proposal, these are statements that will denote a clarifying question. If a group is new to this process, it is supportive for everyone to use a statement like these.

When all questions are answered, you can ask whether there are more questions that might have come up after hearing other people’s questions.

Why do we do clarifying questions rounds? We make sure everyone understands the proposal before we say what we think about it. If you skip this step, you might get to a situation where people have judgements based on misunderstandings which will take the whole group time to notice and clarify. It is less frustrating and time efficient to make sure everyone understands before going to the next step.

In the quick reactions round, everyone gets a chance to give their opinion on a proposal. It is important for every contribution to be brief. Five sentences or less is what a group should be aiming for. No worries, if you have an objection you will have more time to speak.

Here are some areas that can be touched on in quick reactions.

Note that amendments change the proposal. You can accept changes to the proposal but make sure everyone is aware of the change. Show the change visually or by re-reading the changed section. If you make too many changes in the quick reaction round, since you basically have a new proposal, you might have to start at the beginning of the consent process (present proposal, clarifying questions etc.) Your task is to avoid confusion. Confusion will turn into a loss of trust so err on the transparent side even if that entails some redundancy. Better to read the proposal one more time with all the changes than to deal with a disengaged circle member.

Why are quick reactions helpful?

Hearing quick reactions is a temperature check on the group. How much support does this proposal have? Is the proposal ready to be consented to? Maybe too many people have issues with several parts of the proposal in which case you might gather more feedback and do a rewrite before even going to objections.

On the other hand, a quick reaction round is also a wonderful way of community building. You get to hear what others think, where they are with the proposal, what it means to them and what their concerns are, which might not rise to the level of an objection – everything that there is to say next to objections. Especially on controversial topics, it is important to ground every decision in the group, and to learn more from and about each other. However, it is also important to keep statements brief and relevant since it most effective to devote time to addressing objections.

You have a proposal that everyone knows and understands, and you have heard from everyone about the proposal. It is now time to hear from everyone on whether they have objections. Remember, consent is defined by “no objection”. If there are objections, just gather a 1-sentence statement about the nature of the objection. Do not deal with the objection now.

Make sure to explicitly ask for objections. You can’t make assumptions here – someone might love the proposal and object (for example based on a formality like that no term has been decided yet) or dislike a proposal and consent (see this story).

After everyone has spoken, you can then address objections one by one. (More information on how to integrate objections is here.)

After consent is reached, the facilitator announces the decision. If that has not happened already, the exact wording will be noted down in the minutes.

Depending on the intensity of the process, it might be a good idea to take a minute to celebrate the group process and to take a quick break before moving to the next topic.

Go to our meeting facilitation page 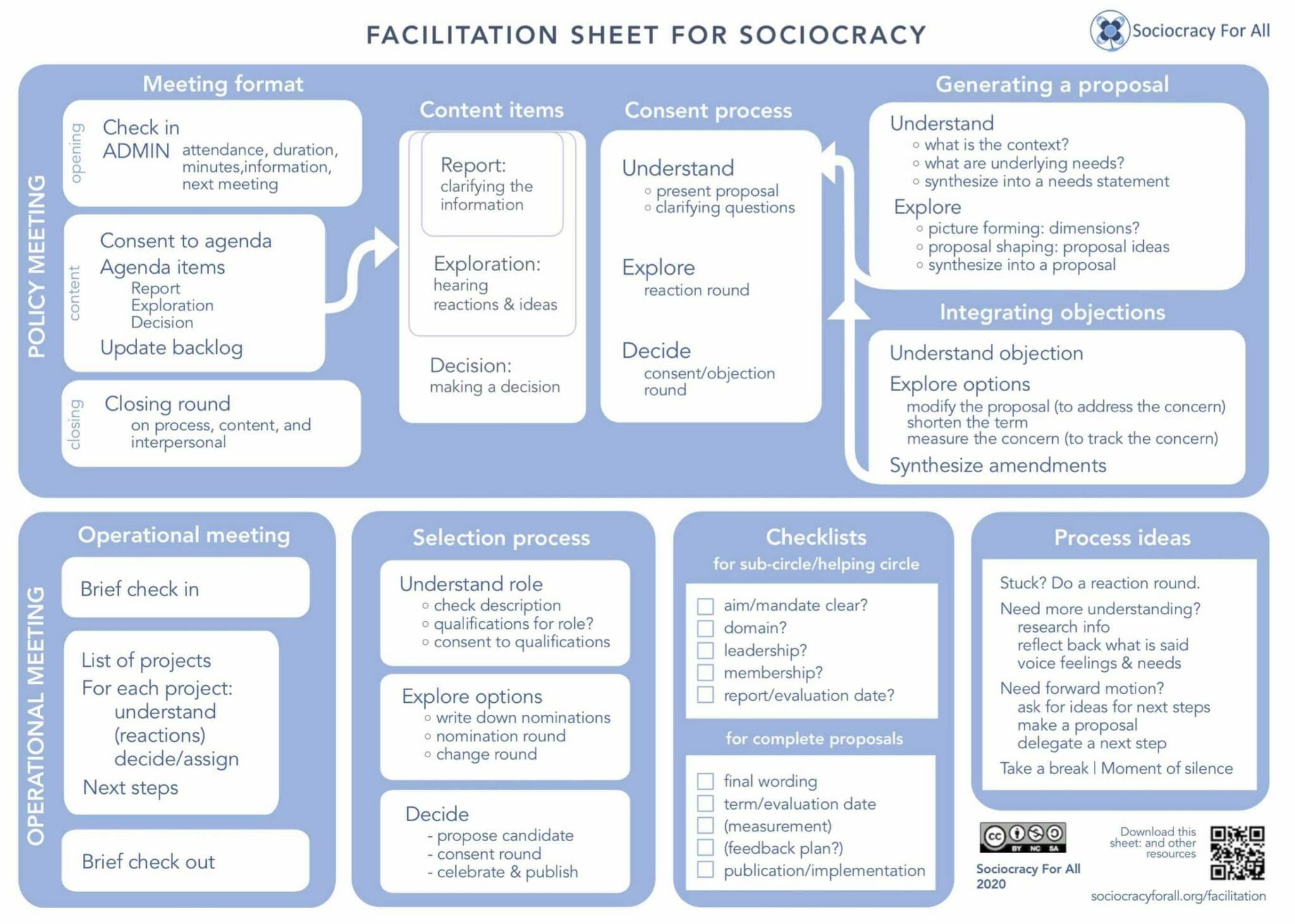