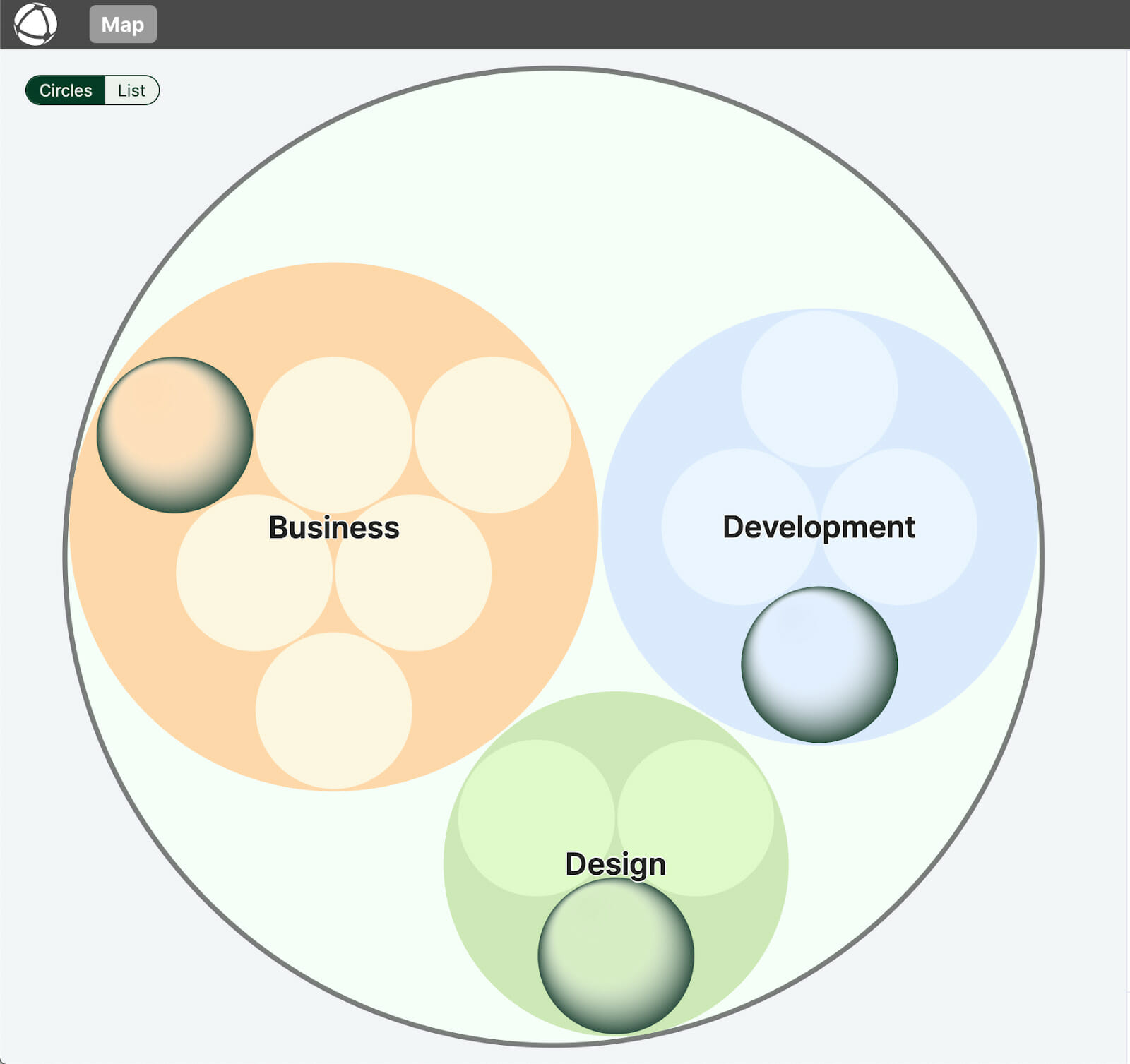 By Linda Nilsson and Ciro Sirignano

When the Swiss design and development agency Nothing AG spun-off one of their internal products into an independent business called Peerdom, the Peerdom team initially started by replicating their mother company’s implementation of sociocracy. After realising that a start-up situation differed from Nothing’s established business, they ended up with an organisation design that stripped away much of Nothing’s implementation. Peerdom was forced to innovate with several new ideas and simplifications in order to respect the severe time and financial constraints and rapid strategy shifts inherent to a start-up environment. 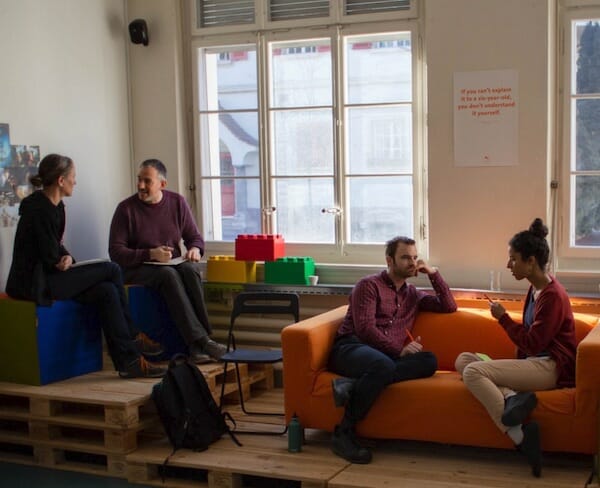 “What do they do and their team”

Peerdoom provides a tool that encourages other organisations to see and interact with their organisation from different perspectives (here is a link to their demo page to better understand their product). Peerdom is an interactive map that provides clarity by orienting teams to purpose and making explicit how and when decisions are made.

Below is a snapshot of the Peerdom team’s organisation design (as visualised by the Peerdom platform). It shows their current organisation map with its circles. Their design includes a democratically elected representative role from each circle. The representative is responsible to facilitate smooth collaboration across circles and collect tensions from the other circle members to be processed in representative meetings.

For those interested in diving a bit deeper, below are the Peerdom team’s roles along with their descriptions.

Nathan Evans was originally hired as a software developer at Nothing AG. Six months before he started, Nothing had created its own blend of Sociocracy and Holocracy. The process eventually led to the signing of Nothing’s own constitution, which drew from both of these practices and added some elements of its own.

Around a year and a half after their shift toward self-governance, it experienced a phase of financial difficulty. Nathan believes the crisis was due in part to everyone focusing too much time and energy on how to best govern and improve the company internally, losing sight on sustaining their core business. He believes they collectively invented activities like “a snake chasing its own tail”.

This led Nothing to focus back on ways to create revenue. Nathan was already working on their Peerdom platform, and became determined to make it a profitable investment for Nothing. Consequently, this meant bootstrapping Peerdom in the leanest possible way, eliminating any obstacles imposed by an over-engineered organisation design.

Looking back, Nathan reflects on how things felt unfocussed in the beginning. Peerdom was being developed without an eye on the bottom line, and team members were often moving in different directions. This, he believes, is one potential risk of self-management. It can be difficult to “say no” and work collectively toward fixed goals. This is especially the case in a start-up, where strategy changes rapidly and there isn’t the urgent need for organisational structure. As Nathan explains: in a start-up everyone needs to do a bit of everything. There are 100 roles to be energised, but your team is small. Does it make sense to specify and work in roles if each person holds 30+ roles? At Peerdom they simplified, and reduced the granularity to three main circles and only a handful of roles.

“So how does Peerdom govern itself?”

First of all, they dropped the Sociocratic “Picture Forming” process, sensing that it sometimes leads to people creating ideas that have not yet been developed, or that are just proposed “to say something”. They believe that if a person cares enough about a tension, he/she will create a proposal and share it with the others. Most proposals are casually discussed and agreed upon. By default these proposals will pass unless there are objections or counter proposals. If the complexity or impact of the proposal is greater, they work through the proposal more traditionally: Reaction round, clarifying questions and then objections. It is then up to the person who made the proposal to either drop it, modify it, or find a compromise with the peer who made the objection. Eventually they reach a decision with this process.

“How do they prioritise and decide?”

Peerdom has created a framework which was established initially to conclude which are the different circles most pressing needs. These are seen to be the top priorities, and when the teams are discussing things, each peer should be arguing through the lens of those needs. This addition gives a reference point to frame decisions and arguments rather than just saying “I believe that…”. They also don’t use an agenda for meetings. The decision-meetings take place with the three representatives. Within those meetings, they do an agenda building in the beginning of the meeting.

Concerning peer-to-peer communication, Nathan believes that he and his peers have learned quite well to speak with one another in a direct manner. Both positive and negative feedback is welcomed and not feared. To keep things lean at the start-up, Nathan doesn’t believe that they need to implement a structured way to give feedback just yet. However, he anticipates that they will soon begin with a system of peer reviews on the role level. Peers can provide feedback on how well their colleague is fulfilling the responsibilities associated with their different roles.

When it comes to interpersonal conflicts, Nathan senses that the team members have a pretty good trust in each other, so when they make decisions or do things they understand one another’s characters well enough to know when to take something personally or not. They haven’t had significant interpersonal conflicts yet, but they are inspired by techniques from non-violent communication.

“What is Peerdom dreaming about now, and what might happen in the future?”

Today, most of their clients are small to medium enterprises. They wish to reach a bigger audience and to work toward onboarding large enterprises. They would also like to encourage governments and larger educational institutions to use the tool. They like the idea of scaling up – they believe that their product brings additional advantages at scale, opening up new possibilities.

Nathan believes that as Peerdom grows, they will necessarily have to split their roles into further granularity and adapt the way that they structure themselves. He believes their model is scalable, since the simple, fundamental mechanisms to adapt to change is built into the DNA of the company. In his experience, companies which self govern and use sociocratic tools from the beginning are more adaptable and resilient to market disruption.

Peerdom is facing the unique challenge of finding balance between start-up survival and continuous development of internal sociocratic organisation tools (Dynamic Governance, Responsive Organisations, Holacracy, Sociocracy 3.0). They noticed early on that the same system that works for Nothing will not work “out of the box” for Peerdom. One key difference is that Nothing is a service agency, and Peerdom is a product company. It was Peerdom’s origins that taught the team that working on bettering their organisation design is often in competition for time and resources necessary to find economic stability.

There are many ways to apply what we refer to as “Sociocracy”. The Peerdom case study shows how they have mixed and matched different types of sociocratic tools, while leaving some processes and procedures on hold until absolutely necessary. For example, they use roles, tensions, and peer-to-peer collaboration, but they do not use double links, have a constitution with explicit rules (such as Nothing does), and they don’t use the picture forming process. Finally, concerning communications, they currently prefer to cultivate a culture for open, honest discussion rather than formalise a structured feedback process. 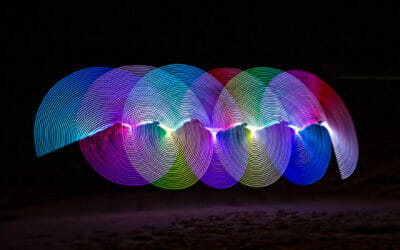 We are observers and participants of a paradigm shift in management. More and more attention is focused on dynamic governance, which slowly, but inevitably replaces the so-called traditional management, hierarchical in the power-over meaning of the word. Different names are being used to describe organizations operating under the new model. How (not) to side-track a meeting

It’s easy to get lost or side-tracked in a meeting! Here’s How (not) to side-track a meeting … or at least how to find your way back pretty fast! Below is a list of typical behaviors that slow down meetings. They are common. They are wide-spread and omnipresent. Learn... 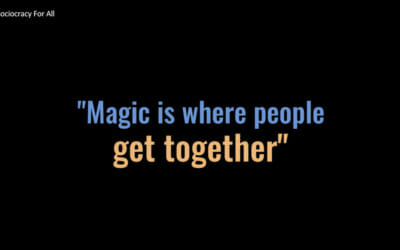 Magic is where people get together!