Børns Vilkår, based in Copenhagen, is dedicated to stopping child neglect in all its forms. They were born with this purpose in 1971 and have continued to grow and expand the way in which they support children. Currently, they run a number of services including phone line and online support, as well as working with schools and government to address the root issues.

About three years ago, CEO Rasmus Kjeldahl CEO wanted to do things differently. He had noticed that the same issues would arise every two to three years, as well as slow decision-making and delays in keeping up with innovation. The idea of adopting sociocracy to address some of these issues] came from reading Frederic Laloux’s Reinventing Organizations.  After that first step, they thought about how to implement sociocracy and teal organization described by Laloux.

At the time, Børns Vilkår was growing rapidly, with a 10-20% growth rate. With this and their wider success, they were in a position where they could afford to make mistakes and to hire people interested in this way of working. First, though, Kjeldahl had to get buy-in from the rest of the management team. After getting his initially skeptical deputy on board, they held discussions and seminars with the management board before bringing the idea to the rest of the organization.

In order to learn more about alternative organizational models in practice, some Børns Vilkår staff traveled to the Netherlands to visit Dutch companies practicing Holacracy. The team also hired an external consultant so that there would be someone external to the organization to answer questions and ensure that change was visible. They also co-organized a course with Sociocracy 4 All.

Soon enough, they ran into some of the tensions that arise when moving to sociocracy. Namely, it asks CEOs and managers to let go of some decision-making power and control as the organization moves to distributed decision-making. One reason there can be push-back is that people who are in positions of power, such as managers or heads of departments, get there and are there because they feel comfortable making decisions and being in control. To deal with this, a degree of self-work and reflection is needed, with those in these roles asking themselves if they are prepared to make this shift.

Børns Vilkår has been a mission-led organization from its inception, with clear aims in serving the youth of Denmark. They have always worked to ensure that everyone in the organization understands “the why” as well as understanding how their own work contributes to the overall mission. This, alongside a clear organizational strategy, supported the successful move towards sociocracy.

Børns Vilkår has since embraced sociocracy, with a number of their almost 150 staff in a growing number of circles. In order to ensure a smooth transition and comply with labor regulations, they maintain two parallel organizational models: sociocracy (circles) and more traditional hierarchy (Blue Mountain).

Børns Vilkår had their first circle in Spring 2019 and currently have 8 active circles. One is their super circle (or General Circle), which is the parent circle to the others. Each circle must have a specific topic as well as a facilitator, secretary, and lead link. Before a new circle  can be created, all of these elements are needed; there is a waiting list of new circles due to a need for more trained facilitators to ensure groups are able to run smoothly. While this is a limiting factor, Kjeldahl and his team recognize the need for training and strong facilitators in order to ensure the benefits and sustainability of decentralized organizing. One circle, the Implementation (Implementing) Circle, had been dissolved when its aim became redundant, but it has now been restarted with the aim of working on the second phase of their transformation.

The transformation has been impressive in terms of staff adopting and working within the sociocratic setup. In autumn 2019, about 30% of staff were in a circle, Kjeldahl expects this will be closer to 70% by the end of 2020. 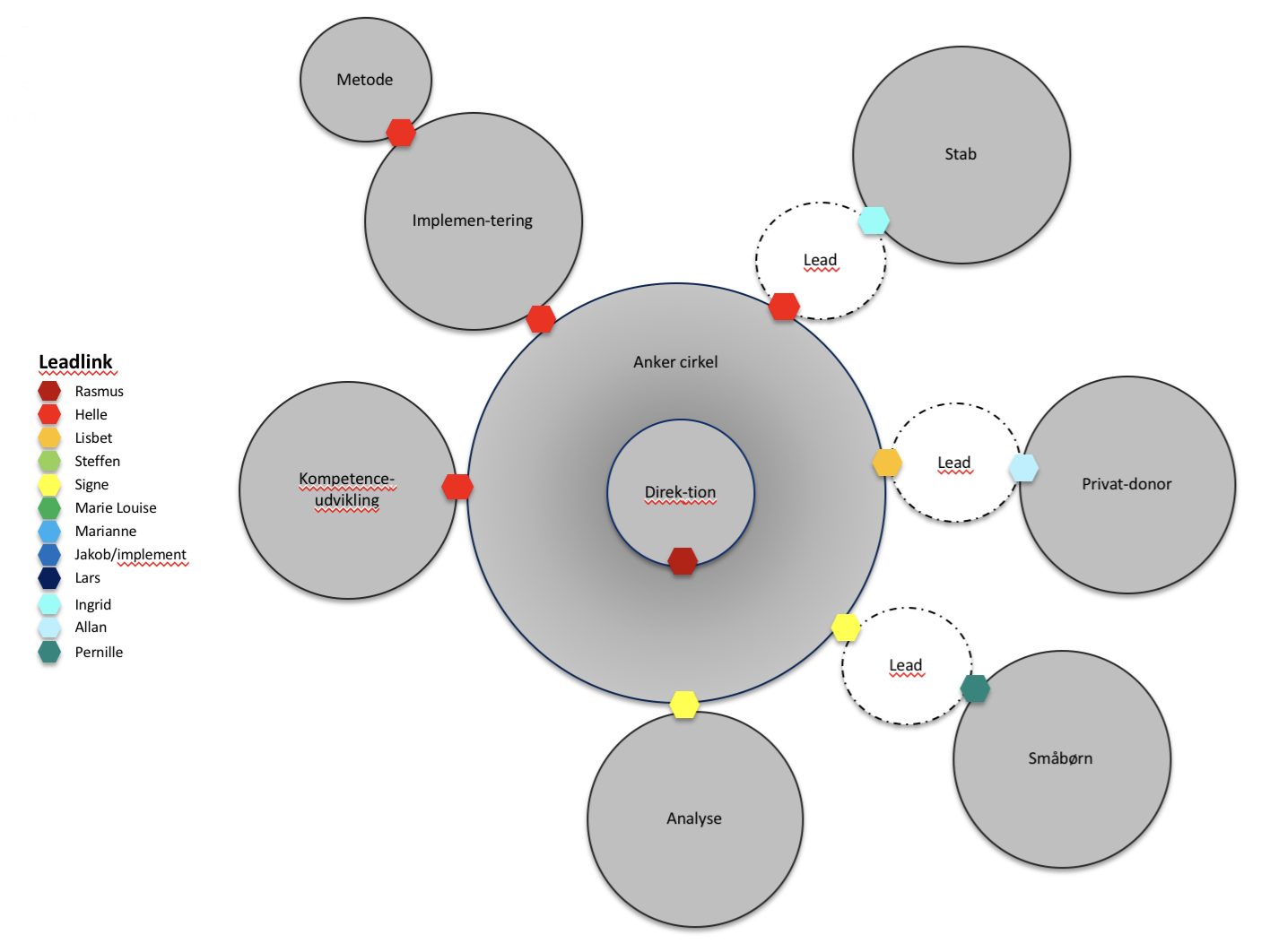 One team which has moved to a circle is Private donations, the team responsible for collecting donations, signing up new donors, and running face-to-face fundraising. Their mission is to collect funds from individuals to support Børns Vilkår’s overall mission. In the previous structure, they had set budgets for, for example, telemarketing. Any changes to this would have to be requested, justified, and approved. Now the circle has an overall budget and they report to management only how much they generate, as well as sharing projections and their investment strategy. The results have been “extremely satisfactory,” in Kjeldahl’s words. An area that used to have very high turnover now has attracted and maintained a very good team.

On paper vs in practice

Blue Mountain, which maintains a more traditional organizational structure, serves as a skeleton supporting the sociocratic elements of Børns Vilkår. This includes HR, strategy, emergency responses, external relationship management and partnerships. The management also sits here, with the CEO and department heads. While some elements may eventually shift into sociocratic-style organizing, others, such as HR, will likely remain as-is due to restrictions in Danish law. This does not mean, however, that the Blue Mountain part of the organization is without sociocratic influences, Kjeldahl notes that the feedback culture has fed into Blue Mountain. Circles feed their work to the relevant department heads, including staff numbers and outcomes. Blue Mountain enables the circles, ensuring resources are supported and filling a coaching role. In addition, this way of organizing that empowers staff has strengthened Børns Vilkår’s employer branding and made it a more attractive place to work. Especially important in the competitive Danish labor market.

When it comes to managing situations in which an issue arises in a circle, such as a staff member who is not contributing, this would be referred to the HR department most likely. Though it has not yet come up, there is a concern that fellow circle-members would wait for someone else to make a decision, another reason to keep staff management decisions in Blue Mountain. On decision-making more broadly, Børns Vilkår says that in order to empower people in circles to both make decisions and to own them, trust and the following elements are crucial:

Culture has an important influence not only on the appetite for trying a new system such as Sociocracy, as aforementioned but also in how Sociocracy is applied. In addition to Blue Mountain, some typical features of sociocracy have not been applied by Børns Vilkår. Double linking, for example, is not used. Danish society has high trust levels, with an expectation of transparency, and they felt that using double linking could actually be a source of tension if people felt they were competing within one role.

Feedback is a key pillar in sociocracy and any change management work. As such, Børns Vilkår wants to ensure that their staff is happy with the pace of change, doing temperature checks across the organization through surveys to all staff members. A survey in January 2020 showed that staff members in circles experience a greater sense of autonomy—a great sign that sociocracy is not only being accepted but working well. They plan to conduct another survey later this year looking at progress in terms of motivation, autonomy, and other aspects of the organization. This is supplemented by departmental meetings and reviews. Kjeldahl notes the feedback culture emphasized in the circles feeds into Blue Mountain as well.

Looking to the future, Børns Vilkår decided to establish a Circle Trainers circle, made up of trainers who have received intensive facilitation courses, to support new circles, facilitating the process of forming a circle and creating circle aims, roles, and goals. The Circle Trainers will also proved internal training for the various circle roles. While mainly for circles where there are no sociocracy-experienced team members, the Circle Trainers can also support established circles by providing advice should any tensions in the workings of another circle arise.

As the world went into lockdown due to COVID-19, Børns Vilkår also had to adapt. While continuing to support their beneficiaries, the staff had to move to remote working. Kjeldahl said that sociocratic meeting facilitation transitions quite efficiently into video conferences and meetings. However, it has slowed the creation of new circles for the time being. The focus for the Implementation Circle has shifted slightly from creating new circles to deepening the understanding of sociocracy within them. Elements that Børns Vilkår wants to bring into the circles are promoting role rotation and further defining roles. They will continue to deepen their knowledge and increase tally to develop the organization.

The current Børns Vilkår strategy and goals run until 2030, when the next strategy planning will have to be held. This will be the first one that will be held with the sociocratic structure and be a key moment for the structure and the organization overall.

Overall, in implementing sociocracy, Kjeldahl finds that the aim is “not the ideal system but the system that fits your culture.” While goal-setting is key in any organization, in the transition to sociocracy, Børns Vilkår is not fencing themselves in by committing to applying sociocracy by a set date. Additionally, this is a “never-ending process,” explains Kjeldahl.

Kjeldahl adds that journey itself is “fun and we want to do it properly.”