Could sociocracy be used to self-govern a country?

I completely understand the hope underlying this question. Sociocracy is a way to govern organizations in a way so everyone’s voices are valued and heard, while still moving forward together. Given the divisiveness and bipartisanship in our societies, doesn’t that sound desirable?

In this article, I’ll make a case that this can not be done in a sociocracy-out-of-the-box manner, but that certain elements can be taken from sociocracy and combined with other pieces of deliberative democracy.

Sociocracy was intended as a governance system where those with a shared purpose (aim) within a well-defined domain (and, perhaps, a shared vision and a shared set of values) who are working together make decisions together. So, for example, the team that runs the website makes decisions about the website (and vice versa). In sociocracy, we hand over the power to that group almost completely. In a way, that group is the executive and the legislative at the same time. To keep it safe, there is a smart feedback and linking process that, alongside with radical transparency, prevents abuse of power. More importantly, circles only have small chunks of power because the overall authority is “chunked” into small bits that are dispersed between different circles.

If we used sociocratic principles on a whole country, then every citizen would have to be part of a government committee that they are experts in. That is, of course, not the case, and neither is it desirable because it doesn’t take 100 million workers to run a country. So we will inadvertently have significantly fewer people working in government than citizens. I am familiar with organizations of 100 people where about 60 people are part of governing circles – so let’s assume a factor of 1:2 works fine. With the US population and it’s 2.8 million civil servants, we get to something like a factor 1:120. That means 119 out of 120 people would not be involved in decision making groups. That’s of course unacceptable. So the tricky question about countries and sociocracy is that sociocracy was made for a 1:1 fit of workers and decision-makers. Sociocracy works well for large groups but not for large un-involved groups.

Of course one can run a town or a country sociocratically in that one organizes all staff sociocratically. But that has nothing to do with democracy as decision-making by the masses.

If we truly wanted to run, let’s say, a town, sociocratically, here is how it would work: we’d have to break down the town into small bits of neighborhoods that then run themselves. The neighborhood circles would have to be linked and nested to (a) represent the people. Yet, there is also work to do, for example roads to build, a school system to run etc. Those should be addressed as locally as possible, yet some centralization might be useful, for example to make sure the school system is equal in all neighborhoods (otherwise we run the risk of the less wealthy part of town to be run with fewer resources). Also, of course, there is just a lot to say for synergy. “Higher-level” topics that can’t be broken down to a neighborhood level, like the sewage system, would need a circle that decides town-wide. These circles would have a (b) topical domain (e.g. education, sewage etc). It’s unclear how they’d be connected but that’s mainly a design question.

What is striking in this model is that power would be radically localized. The way I explain this model to people is like this: we might still have an overall leader of the city (regional/national) level that would be selected by their layer, but: with most of the power dispersed in local groups, the sliver of power would they’d hold would be so small that probably no one would even bother knowing that leader’s name because they’d be almost completely insignificant.

There are examples of real-life action in this domain. See the Neighborhood Community Network, for example in India where hundreds of thousands of adults and also (in a separate structure) children are organized in neighborhoods that are nested and linked in several layers up to a national level. They already use the sociocratic selection process and are determined to use consent as a decision making method.

A hybrid version is to involve more people – aiming for all citizens – in government, yet in a different way. There might still be elections for those on higher levels but the idea would be to combine three ways for participation:

Most of these are design puzzles that need to be solved to scale the ideas and values of sociocracy onto a town level. My personal ideal vision is a blend of all those ideas.

What do you think? 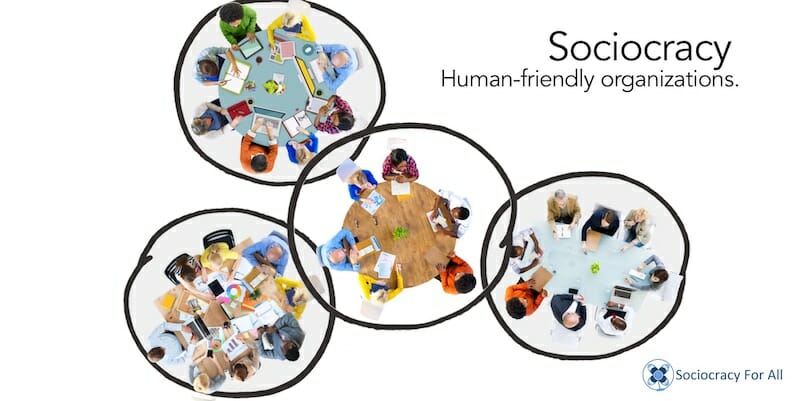 This blog post is a great place to start.

Have some knowledge and want hands-on experience?