I remember vividly sitting in the democratic school meeting room as the emotional tension built. I had been attracted to democratic free schools because of the empowerment of children to make decisions about their everyday lives, including what they learn, and how the school’s rules are made, to even electing the staff. Voting at democratic free schools happens in a school meeting where adults and children have equal votes.This meeting used the standard Robert’s Rules of Order, the very effective and widely used standard parliamentary procedures developed by Henry Martyn Robert in 1876, with raised hands to speak, and majority rules vote. The vote was very close, and it was hard to tell which way it was going to go. The topic up for a decision was hate speech, whether or not some comments that were left on a wall could be considered transphobic and violating the rights of students. The school was split on whether or not it was a joke to be considered free speech, or something offensive to be taken seriously. The debate was fierce, and feelings were running high. When it came down to a vote, the side that believed it was a joke narrowly won. Some of the students left in tears. In the hallway outside as I talked to them, I found that they felt like their voices didn’t matter and they hadn’t been listened to. As I listened to them I felt knots in my stomach about how things had gone. As much as I strongly believed in democratic education and empowering children to make decisions about their daily lives, I didn’t like the process or the outcome. I could see that the school was torn apart and that the vote hadn’t really resolved the issue at hand.

Over a year later, as I was in a meeting at the democratic school that I founded using sociocracy, with a different set of rules, I was having flashbacks. The topic at hand was profanity and hate speech. As we talked in rounds with each person taking a turn, people thoughtfully contributed their opinions on the matter. As everyone talked, the issue became more clear. Profanity was seen as freedom of speech, but needed to be balanced with the right to be comfortably free from profanity as well. Profanity could be used with consent in private spaces, but hate speech would not be allowed at all. It was decided that hate speech would be defined by the community as any speech that any member of the community found inherently offensive. A term limit was put on the decision to check in and see if it was working, at which time the decision could be modified.

When this decision was considered, the room felt orderly and each person spoke calmly in turn. I couldn’t help but think of the difference between the two meetings, how much more emotionally safe I personally felt during the sociocratic meeting as opposed to the one using standard parliamentary procedure. At the end of the meeting we did a round of reflections on how the meeting went, and the students by and large were happy with the outcome. 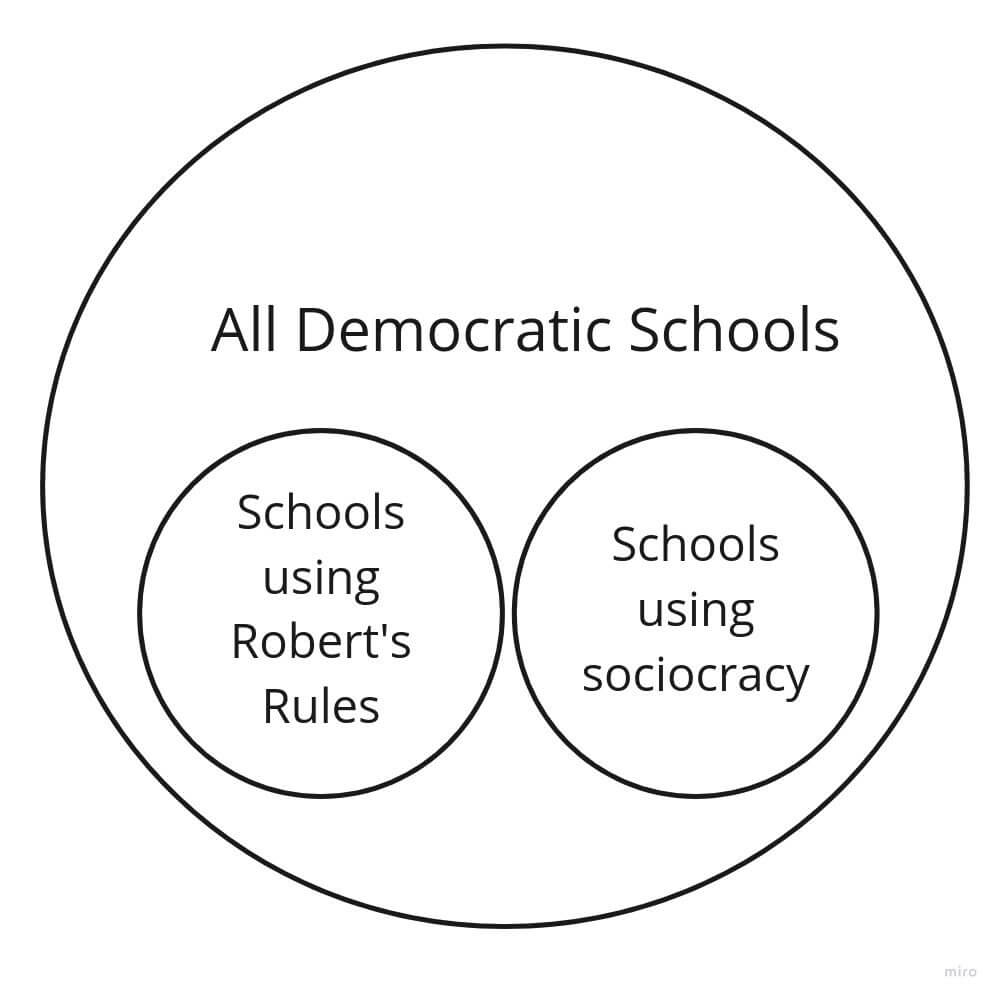 After seeing many such meetings at the democratic school using Robert’s Rules that I interned at, as well as seeing how majoritarian democracy was playing out in society as a whole, I came to the conclusion that I wanted a different decision-making method for the school that I was founding. I wanted children to feel empowered, and also to feel that their voices were heard no matter what side of an issue they were on.

The word democracy comes from the Greek “demos”, and is the shared rule of the people. The original meaning of democracy is a very large umbrella, of which majority rules is only one subset. Sociocracy, on the other hand, derives from “socios,” and means “the rule of the associates.” Sociocracy is one form of democracy as it could be, based on consent. When I heard about sociocracy, I fell in love with the idea that decisions were made by consent, taking into consideration the voices of everyone affected by the decision. The idea that the minority would have a say in the outcome of decisions was very appealing to me as I had seen decisions where so many people were left unhappy with the results. 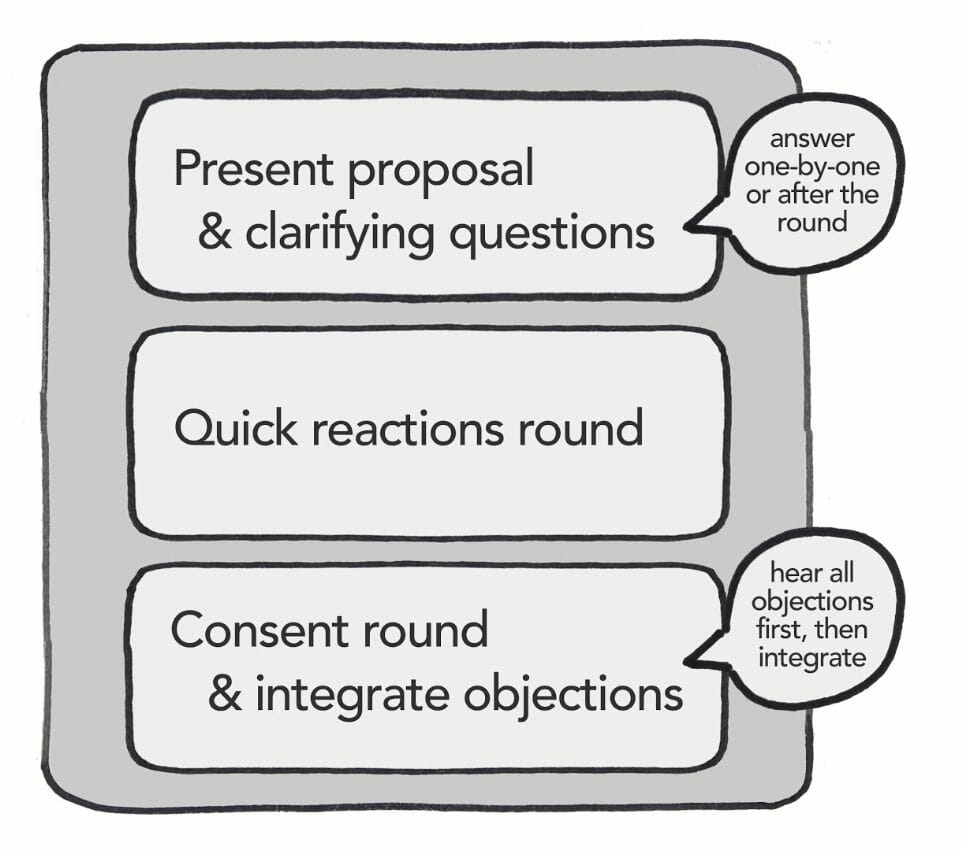 Consent is very different from a Robert’s Rules style majority rules vote. Consent decisions are made in smaller groups of six to eight people in interconnected circles as opposed to a large plenary that includes everyone in the organization. People speak in rounds instead of raising their hands to be put on a list to speak. The biggest difference is probably that everyone gets a chance to speak, not just the person putting forth a proposal or people who have strong opinions about it. This way, the voices of the quiet ones are included as well as people who are more comfortable speaking up for themselves. Additionally, during a round people are only speaking to their own opinions and not reacting to the opinions of others as in a parliamentary debate.

In Robert’s Rules parliamentary procedure, either you are for a proposal, or against it. There is room to amend proposals, and this often happens. However, the ultimate answer is “yes” or “no.” In sociocracy, there is a wider range of tolerance to decision making. Your preference, or “yes,” is still included, but consent also includes “I don’t agree with it, but I can tolerate it.” Decisions are seen as “good enough for now, and safe enough to try” for a limited time period, after which decisions are evaluated. Lastly, if you see some danger, or if the proposal is unclear or incomplete, you can object to the proposal.

Diagram from the handbook Many Voices One Song

The way that sociocractic process goes is, a proposal is put forward, and then everyone has a chance to ask clarifying questions. After the clarifying questions round, there’s a quick reactions round for people to say what they think about the proposal. The final round is a consent round where people who have any objections to the proposal, can speak up. Objections are valid if there is any reason that the proposal isn’t good enough for now or safe enough to try. It’s not merely personal preference. This way of making decisions is actually quite quick and efficient, in a way. There is sometimes more discussion beforehand but it evens out in the long run. Everyone who has a stake in a decision has a voice, which makes new policy easier to implement. Harvesting the objections is a way to amend the proposal and make it even better. In a majority vote, though it may go very quickly, but the people whose voices weren’t heard may leave feeling disgruntled and may even work actively against implementing the proposal. Sociocracy contains the best of both worlds in that the group can decide via consent to use majority rules decision making if they want to.

One way I saw consent decision-making work in practice was with a decision at our school about how to celebrate the end of the year. One group of younger students wanted to rent an inflatable bounce house and put it in the yard for an end of year party. There were objections from some older students that it would not be safe because there are too many students to fit in the bounce house, and that people would get hurt. In a majority rules situation, the two sides would be pitted against each other, bounce house vs no bounce house, and one side would lose. Instead, the objections about safety were incorporated into the proposal. It was decided that it would be better to go to a local trampoline park on a field trip, where everyone would still get to meet the needs of having fun, celebrating the end of the year, and jumping around, while still being safer than in a crowded bounce house.

I wholeheartedly support all forms of empowering young people through including them in the democratic process. I hope to see the further democratization of schools and workplaces in my lifetime, leading to a more egalitarian world. I see schools using sociocracy as a subset of democratic schools, ones that happen to use sociocracy as a governance system. From the vantage point of an adult at a school using sociocracy, I think that consent decision making solves many of the problems of majority rules parliamentary procedure as put forth by Robert’s Rules. It doesn’t take a long time to look around to see in our society how a narrow 50/50 vote can leave half of the country feeling left out, and to make people deeply divided. I feel that in the consent-based decision system, the best of what everyone has to offer is put forward. Working towards consent by working through objections helps bring everyone together toward a common ground.

Want to learn more about the decision making process in sociocracy? Check out our trainings and events page!