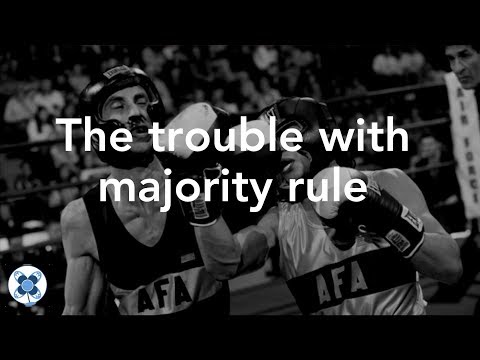 “The trouble with majority vote”

Majority rule creates winners and losers. It breaks us apart rather than bringing us together. Majority rule becomes a game.

The focus is on winning not on the ideas. The focus is on who is ahead in the race not on what is healthy for the people. False scandals, voter suppression, that’s all part of the game of winning. In the United States, majority rule does not even mean one person one vote. Whether you win by 60 million to 59 million, or by 4 to 3, we are left divided. Relationships are broken. The winners remain clueless and the losers apathetic or rebellious.

Inevitably, the tables turn. The winners become losers, the losers become winners, and nothing changes except for the color of the paint. Without connection and dialogue across every divide, inequality persists. The short-term perspective wins over the long term perspective. No matter who wins everybody loses.

There are many variations of majority rule that are more inclusive than simple majority. They point the way to what it means to be a human society in the 21st century. No one can be ignored. Everybody’s voice matters. Everybody’s needs matter. An enemy is a friend you do not yet know. We need a form of governance and decision-making that brings us into connection and dialogue with each other, that opens the flow of creativity towards most effectively meeting the needs of all. I think such a possibility exists. It’s called sociocracy. 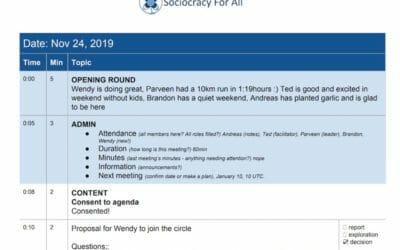 Agenda/minutes of an entire meeting (view...